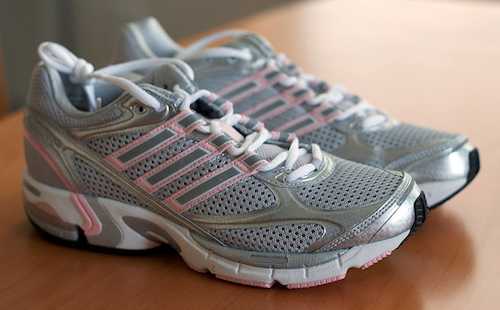 When last we met I was fretting about my first foray into outdoor exercise, but like anything you’re dreading the day still arrives whether you want it to or not. So one Monday morning in July I woke up to the annoying iPhone alarm at 6:00 AM, dragged my anxious self out of bed, forced some toast down my throat and walked over to the class meeting point. I’m pretty sure this was the one and only time I ever arrived early. Right in the nick of time is really more my style these days.

The South Beach BootCamp location has a lot of pretty scenery including wide expansive views of the bay, some stunning sunrises, and the ever present behemoth that is AT&T Park. I’m a Red Sox fan but that stadium is gorgeous so Go Giants! Anyway, as I waited for the rest of the class to arrive I silently took stock of everyone and soon realized that I was definitely going to be the most out-of-shape character in the group by far. This did little for my morale and I was still pretty much shaking in my sneakers by the time we took off for our warm-up lap.

This short run, which I came in dead last on, (go me!) was followed by a series of lunges and something called an inch worm. This is when I seriously balked. I could not believe that I was about to touch a sidewalk in San Francisco with my bare hands. If you have any kind of sense what-so-ever please please please buy yourself a pair of gloves and wear them to your first class. Some people wear weightlifting gloves, but those are fingerless and I don’t like touching gross stuff so I wear an old pair of Burton liner gloves that get washed every day.

So after I crawled around on the sidewalk for a bit while having a mini germaphobe freakout in my head we then completed several sets of lunges interspersed with push-ups. Needless to say my push-ups were done on the wall. I think I probably completed 3. At this point we were broken into two groups: returners and beginners. The returning people were sent off to do a set of exercises that, at the time, pretty much made my jaw drop in disbelief and involved yellow medicine balls, something called a super-cat, and a lot of running, while the new people in the group got to do a fitness review of sorts.

This activity will definitely take you back to junior high and the notorious President’s Physical Fitness Test, and if you were not the kid who held the school record in sit-ups for 60 seconds or who excelled at the bent-arm hang then oh you’re not going to like this. Thankfully no one makes you do the shuttle run but you do get timed doing sit-ups, push-ups, and a mile and a half run. I have it written down so here’s a benchmark for you. It took me 21.24 to run 1.5 miles. It’s OK. Feel free to laugh. As you can imagine I came in last again, and that run (honestly I had to walk quite a bit of it) pretty much did me in for the day. But that was it. Class was over. One hour of strange new things and I had survived.

Then something happened. Even though I had to touch the filthy sidewalk, do sit-ups in public, and run around a park 6 1/2 times I didn’t feel scared or grumpy anymore. In fact, I felt pretty proud of myself. Yay endorphins! And honestly, that really is why I’m still going to BootCamp 4 months later. Sometimes there are workouts you feel great and confident pretty much the entire time through and that feels awesome, but sometimes I spend 60 minutes hating everything we do. But there is always some moment even after the so-called “bad days” (usually when I’m home and in the shower) that the amazing feeling returns and I can’t believe I’ve improved, I go to class regularly, and that some of those jeans I packed almost fit again.

Oh but wait. It’s not all happy endings around here just yet. This isn’t Dawson’s Creek people. I’ll fill you in on what it’s like to participate in the “running day” when you usually only run if someone is chasing you next week.