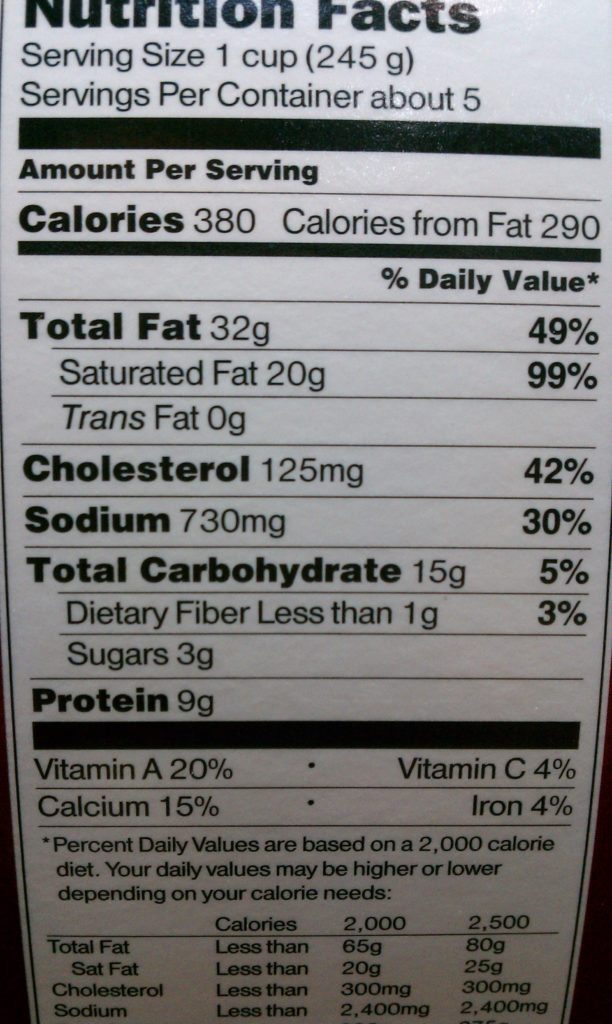 99% saturated fat.  Twenty grams.  In one serving!!  I’ve never seen that before.  I’m sure I’ve eaten that much before without even knowing.  Maybe at a bbq or a carnival (who can resist funnel cake or deep fried items like twinkles, candy bars and of course, chicken).  But never before have I seen a food label with anything coming near to 100% saturated fat in a single serving (and less than 400 calories!).

There was a time when I dismissed labels completely as stupid.  You know how people eat steaks, but they cut off the fat and don’t eat it?  Well I’m the guy at the end of the table who says “is it cool if I eat that?”  Yes, I know.  That is gross.  I was one unhealthy dude.  At my most unhealthy, I was 205 pounds.  Did I mention that I’m about 5 foot 4 inches tall?  I weighed more than some professional football players (cornerbacks not linemen).  I ate with the mantra “The ‘F’ in FAT stands for Flavor and the ‘A’ and ‘T’ stand for ‘AT,’ as in FAT is where the Flavor is AT!”

Okay.  That last paragraph is what is known in the industry as a ‘tangent.’  So where was I… Oh yeah… 99% saturated fat!!  So what is this mystery item?  The answer is Lobster Bisque which can be found at your local neighborhood Costco.

Costco is so big and has so many healthy items, it kind of snuck (is ‘snuck’ a word?  or is it ‘sneaked’?) up on me that they also have plenty of unhealthy items.   I know that sounds naive.  Costco is the size of like 10 football fields(not sure if I’m exaggerating for dramatic effect or if that statement is true), so of course they must have unhealthy items.

After thinking about it for a second, I guess the thing that shocked me the most is that one serving of anything could contain 99% of your saturated fat for the day.  Not even one serving of spam(25% less sodium version aka healthy spam) contains 99% of the daily recommended value of

saturated fat in one serving.

It takes more than 3 servings or just a little over half a can of spam to equal ONE serving of the lobster bisque.

After cruising through the rest of Costco I avoided the lobster bisque(and the CrazyTasty spam) and made healthy choices and you know what, just because something is healthy doesn’t mean it isn’t yummy. Bell peppers, spinach, butternut squash, sandwich thins, lox, yogurt, hummus and many other food items pack a lot of flavor while at the same time not clogging your arteries!

My current favorite snack is seaweed salad.  It’s not for everybody, but it would take 50 servings of it to match the saturated fat found in one serving of the bisque.  On that note I would also not recommend not eating 50 servings of anything!

***any questions or comments regarding this post can be directed to foxbehungry@gmail.com or twitter.com/foxbehungry***