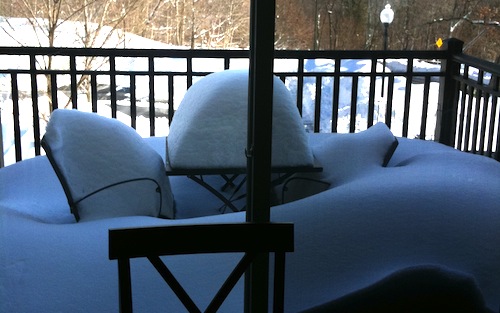 I moved to San Francisco from Boston in May. At that point I was coming off a seemingly endless winter of snow, sleet, and stuck indoors-ness. It would appear that most of those long cold months I lounged on my favorite chair watching television and football games while drinking wine and eating very very bad things. So I arrived on the West Coast in the absolute worst shape of my life. Go me!

My new apartment came equipped with two lovely gyms full of fancy exercise things so I figured I’d hop on the elliptical every day for an hour and all of that booze, cheese, and pastry I’d packed onto my thighs would disappear in a few weeks and the eight pair of jeans (I diligently packed even though I couldn’t fit into them) would then welcome me back with open arms.

Not so much. Working out made me feel better but obviously participating in the same thing every single day simply wasn’t doing the trick. The jeans still languished in the closet untouched and I still really enjoyed Wheat Thins. Then, one evening my boyfriend came home from work and excitedly told me all about the boot camp classes in our neighborhood that he’d read about online.

But the more he told me the more anxious I became. He seriously wanted me to sign up for a six-week session with him. Instead of agreeing, I laughed in his face. Boot camp? Me? Be serious! I’d never even played a sport before. The extent of my workout “regime” involved walking, the elliptical, and yoga. I certainly couldn’t run a mile. I hated being dirty and I really wasn’t a big fan of the outdoors in general, plus, I couldn’t stop picturing scenes from Full Metal Jacket in my head. What if someone yelled at me like that in front of other people?! I’d dissolve into tears. No way was I subjecting myself to anything that could possibly be that unfamiliar and unsettling.

So I told my boyfriend in no uncertain terms that I would rather be eaten alive by a raptor than exorcise outside in front of other people.

But I couldn’t stop thinking about it, and the more freaked out I got over the possibility of actually having to step out of my safe (and let’s face it very ineffectual) gym-based comfort zone, the more I realized that the irrational fear I was feeling meant that I absolutely had to sign-up. It sounds silly to me now, but honestly that was one of the hardest things I’ve ever done.

Unfortunately, it’s not like I hit the submit button, Bootcamp SF charged my credit card and then I went to my zen place. Some part of me was nervous about the first boot camp session every single day until I attended my first class in July, but I’ll tell you all about that day next week.