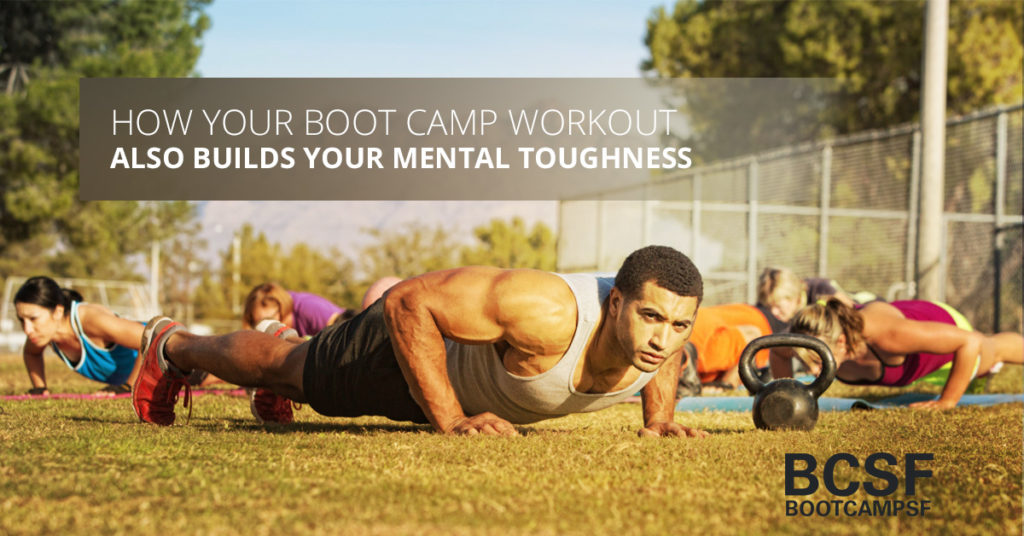 One of the attractions to boot camp fitness is the element of drill that is built into the very name “boot camp.” People love the fact that this is not some namby-pamby, fluffy, “follow your dreams”-style workout. It’s a workout that kicks serious butt in a way that may leave you gasping for air and sore, but that also builds that empowering, transformative attitude that only comes when you’ve pushed yourself past the limit that you previously thought you could go.

Turns out that this is the same recipe that helps to build your mental toughness. In a world of people who are increasingly soft on themselves, mental toughness is increasingly rare. But it’s the kind of people who show up to boot camp who are raising their hand and saying, “Bring it on. Make me mentally tough. I intend to be built into a winner. And I do not intend to look back, fail, give up, or chicken out. I’m in this because I want this. I want this because it will do me good. And I will reap the benefits of the investment I’m making NOW all the way up into my old age.”

There’s just something about having another person to force you (encourage you) to perform above what you would have naturally done that brings this sense of empowerment. By ourselves, we would have stopped at the last rep and not gone any further, but when someone calls out, “One more! You have it in you! Come on!” you suddenly gain grit to try.

It’s when you win at a string of these small tries that a very subtle shift takes place in your mind. No longer do you think, “I’m dying. I’m going to be so sore. I can’t believe I got myself into this.” Suddenly, you find yourself saying to yourself, almost with wonder and admiration, “I’m ALIVE! I’m going to be so STRONG! And getting myself into this was the best thing I have ever done.” Breaking through that wall happens to all our long-term boot-campers, and that feeling is so addicting, you’ll never want to let go of it.

However, it takes someone who sees your potential, who knows how to take you there, and who is trained how to tread the fine line between motivation and defeat, to bring people to that place of transformation. This is where our trainers at Boot Camp San Francisco come in. All our trainers at BCSF have their own unique style, approach, and interpersonal communication methods. No, you won’t necessarily be yelled at like a new recruit in army boot camp, but yes, you will be pushed. You’ll be pushed with expertise and skill, and your achievements will taste all the sweeter when you know how much you overcame to get to that point.

The fitness you gain from Boot Camp will have effects for years, making you age more gracefully and retain more muscle and bone mass as you get older. But the mental toughness that you developed will also stay with you for years. Furthermore, it can overlap into other areas of your life, giving you an edge in your studies or at work. The attitude of pushing yourself one more step beyond what you thought was your capacity can easily set you apart from your peers, who are still measuring their strength by what they currently perceive.