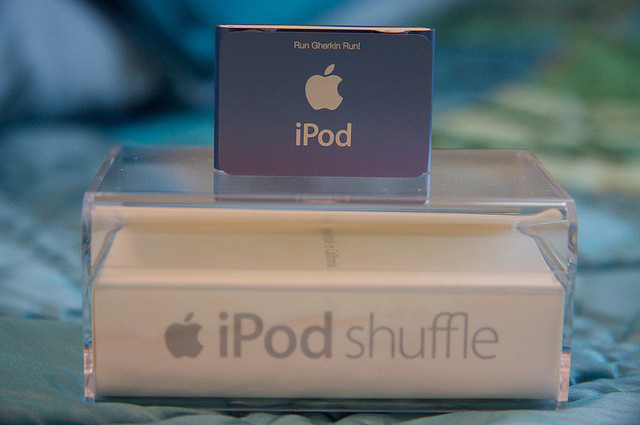 Approximately 96 factors need to be at their ultimate level for me to be able to run for exercise. For instance, my shoes need to be tied just so, socks a certain fabric, it can’t be too hot or too cold, I need my iPod, my workout clothing can’t be too big or too small etc… Yes, I do in fact realize this is a fantastic array of excuses, but I’m not one of those people who thinks running is fun. For me running is right up there with going to the dentist, shopping at the mall on Christmas Eve, and public speaking. But I don’t want it to be.

In the past I’ve given the running thing an honest go. My boyfriend tried to get me into it. He even bought me this insanely cute Nano a few years ago and had it engraved with my nickname and a very “ra ra” sentiment. I ran and walked and ran and walked and huffed and puffed and somehow managed to be able to run 2 miles without stopping once in awhile (when all of the above criteria were met, of course) but then it would get cold and dark and finally it would snow (this being Boston and all) and I’d hibernate and half heartedly drag myself to the gym to read trashy novels on the elliptical here and there. Then when spring came I had to inevitably start the awful process over again. Run, walk, repeat.

So when I signed up for BootCamp and saw the box inquiring if I could run a mile I suffered some sort of delusion of grandeur and said yes. Then I proceeded to frantically run on the treadmill at the gym to make sure I could. But running on the treadmill is nothing at all like running outside and it is lightyears away from running in Potrero Hill.

Wikipedia opens it’s article on the area by saying “it’s a hilly neighborhood.” To which I can only respond, “Are you kidding me?!” I’m pretty sure most of this part of the city has a steeper incline than the mom and pop “ski slope” in my hometown. Not to mention that I had dinner at a friend’s home in Potrero recently and had to take off my heels before I even got out of the cab so I could get to her front door.

If you’re from this area and grew up running these small, let’s face it, mountains, then you probably don’t think anything of bounding up and down these streets like an elegant gazelle. I, on the other hand, dread our Tuesday running focused BootCamp sessions. This is the day that gets in my head like no other.

Right from the get go I start out behind everyone. I’m slow. Super slow and have seriously questionable stamina on straightaways so as soon as my legs come in contact with any degree of incline my brain pretty much screams STOP. I drag myself as quickly as possible up and then down to our usual first meeting point where there just happens to be a railing perfect for doing many many sets of horizontal pull-ups interspersed with a run up a small hill that I’d much rather tackle with snow boots and a sled.

If you’re very lucky you won’t have to run up the picturesque staircase (that never ends) and happens to also be strategically nestled in-between a number of sleepy homes across from the makeshift concrete gym. It’s like the Bermuda Triangle of BootCamp. I usually have just enough time to think some very dark thoughts about how much I hate Tuesdays and then we’re off again.

Sometimes we’re supposed to run up and down Wisconsin Street, a very long hill that that meanders and tricks you into thinking you’ve made it to the top only to realize that there are at least two more blocks to go.  Other times we have the distinct pleasure of pushing our fellow boot campers up another steep hill backwards, sometimes we might carry a medicine ball up a hill, and other times you may just be asked to do walking lunges for a very VERY long time. And just when you think this crazy outing will never end Brooks sends us all over to the Potrero Hill Playground.

This colorful and cheerful place serves at the backdrop for the final few minutes of class which are generally spent doing things that make my nonexistent abs hurt and holding plank on very shaky arms. Then it’s over and I can hardly believe we’ve only been galavanting about the neighborhood for an hour.

My walk back home takes around 20 minutes. This means that I have plenty of time to forget all about how much I hate those hills and how great I feel. The meditative hike to my apartment does unfortunately also remind me that I inadvertently left that cute iPod in my jacket pocket and washed it a few weeks ago. It still plays but only holds about 20 minutes of charge thus making it, now and forever, impossible for all of the so-called “must have” criteria I described above from ever happening again. Yet, I still somehow managed to make it through class without extra accessories. Hmm… maybe that means I’m getting better at this Tuesday hill thing?